Last month in honor of Father’s Day, the Florida CattleWomen collected nominations for their “Ultimate Ranch Dad” contest. In celebration of area farmers, Central Florida Ag News is sharing the winners and other outstanding submissions.

Submissions were divided by age group:

Harlee’s dad has instilled in Harlee the drive to always get the job done efficiently and when you see a job to do, do it, and do it right the first time. Harlee shared with Florida CattleWomen that her dad always tells her to take care of the livestock first before anything else is done. His favorite saying is, “If they don’t eat, we don’t eat.”

She says the best advice her dad has given her so far is, “What doesn’t kill you, makes you stronger.”

One of the simplest safety practices he has taught Harlee is to “just get out of the way.”

Harlee is very proud that her dad is so willing to help others in need.

“My dad will give the shirt off his back if someone needs it.” She is very proud that he volunteers at the Polk County Youth Fair and promotes the beef industry, but what is closest to Harlee’s heart is her relationship with her dad. “My Dad has taught me a strong work ethic, responsibility, values, leadership, animal husbandry, and best ranch management practices, (BMP).”

Cady Jane and her dad’s favorite job on the ranch is working cows because they get to do that job together. Two important safety factors her dad always tells her and her sister, Cooper, is to always be aware of your surroundings on and off the ranch and to never play with hot shots. Cady Jane says her dad has taught her and her sister a lot of “ranch manners.”

Cady Jane is proud that her dad takes the household garbage out for Mom. She believes her dad is the “Ultimate Ranch Dad” because he took her second-grade class out on a field trip at their ranch. She also feels fortunate that after a long day on the ranch, her dad still finds time to play softball with her and her sister.

She is also very proud of all the valuable lessons her dad has taught her and her sister, such as how to leg a calf, administer medicine, fish, drive a Polaris, and especially how to hog hunt.

Nominated by his son Beau Barthle, 3B Cattle, Spring Hill

Beau is pretty detailed in describing what makes his dad the “Ultimate Ranch Dad.” First off, Beau and his dad love to work and fish on the ranch. Work is always first because, as Beau says, “We have to take care of the cattle before we do anything else.” He says, “My dad thinks the cows are good, but he has a serious love for Bully the bull because he makes the best bull calves and best yet you can feed him oranges and pet him.”

Beau is really happy his dad taught him how to open all the gates on the ranch because now that is Beau’s main job on the ranch.

Beau stole some hearts when he told the Florida CattleWomen that his dad “works hard every day to bring the money home to Mommy for her to use.” 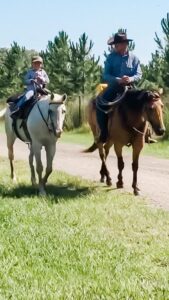 Joseph II thinks his dad is a master builder and has “super strength.”

“My dad can lift anything,” he says. Family is very important to his dad. “My dad will stop anything to make sure we are OK.” His dad loves the black angus breed and pushes safety when his family is around cattle. One safety precaution his dad tells him is to never walk close behind cattle. He appreciates his dad for making it possible for his family to be involved in the cattle industry.

Mayland likes it when he and his dad ride around on the 4-wheeler on the ranch. His dad’s favorite cow on the ranch is Blacky because she is friendly and leads the cows to the cow pens. Mayland says his dad has given him an important job in the cowpens as Mayland is responsible for delicing the cattle. When Mayland is asked how his dad helps Mom on the ranch, he replies that it is his dad’s responsibility to “spook the cows out of the yard.” He says his dad is a pretty cool dad. 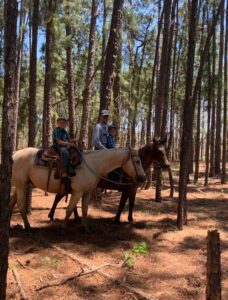 Judson likes to rope a lot, and he aspires to be a good roper like his dad. He is pretty impressed with his dad’s horse, Bo Jet, because the horse “is good and as fast as a jet.” A fan of all fast things, Judson especially likes his dad’s favorite cow dog, Maci, because—you guessed it— “she’s super fast and she’s good at getting the cows in the pens.” When asked how his dad helps his Mom on the ranch, Judson says his dad sometimes makes supper. 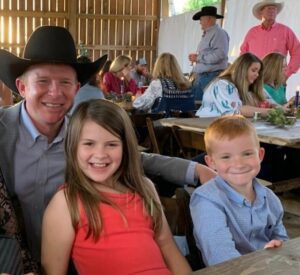 Nominated by his son Wyatt Barthle, 3B Cattle, Spring Hill

The first thing Wyatt will tell you is that his dad loves taking care of the family’s cattle. Wyatt also makes sure to mention that his dad “loves me, my brother and sister, and especially loves his ‘Trump Truck.’” He says his dad teaches him to never run your horse back to the barn. Wyatt believes his dad is the best cowboy ever. 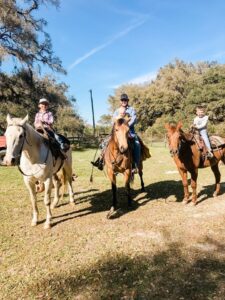 Hannah Kate says her dad loves her, her brother, and Mama more than anything and is always there for them. She says her dad is very open-minded, even when Mama gives him terrible ideas.

She is extremely proud of her dad because he works very hard for the cattle industry and is always willing to help others. 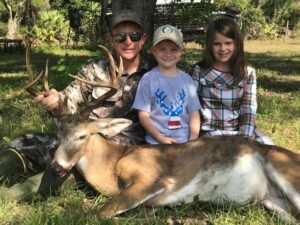 Kase’s dad always helps him saddle his horse because he still has some growing to do before he can saddle his own horse. Kase says he and his dad like to ride horses, whistle, and crack the bull whip. Kase also told us a little secret: His dad’s cow dog Flapjack is the best cow dog because Flapjack can sort cows and is the best swimmer in the creek water. Kase is very proud of his dad 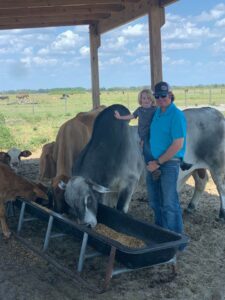 Kennedy thinks her dad’s best skills on the ranch are building fences and working cows because he has been doing that his whole life. She says family is the most important thing to her dad, explaining that “all of his kids will one day grow up and move out of his house, so he wants to spend as much time with us, as he can.” She says her dad is full of wisdom and always reminding her to “tighten the saddle and stay a good distance when walking behind a horse.”

Findley thinks her dad is very pleasant in the cow pens because he is her dad, “That’s why.” She also explains that her Dad’s cow dog Olive is his favorite cow dog because her dad told her “he finally has a dog that likes him better than Mommy.” Findley is very proud to say that her dad is a big help to her mom on the ranch because “he takes me and Beau out to check cows so she can make dinner in peace.” 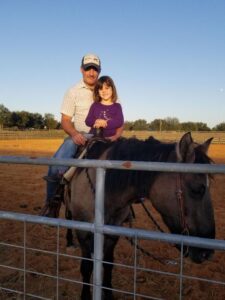 Myles let us in on a few things that his dad is partial to: One is his horse Pistol because he is fast. Second, he’s partial to his cow dog Lissie because she makes a pretty good circle around the cows when we work them.  He says his dad’s behavior in the cowpens could use improvement, but that’s OK because, “my Dad helps my mama feed the chickens on the ranch.” He thinks his dad is top notch and definitely an “Ultimate Ranch Dad.” 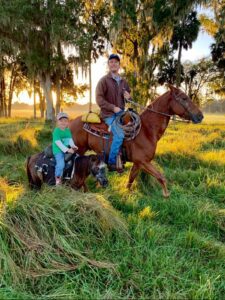 Owen believes the best job his dad does on the ranch is fixing everything he and his sister break because “we break a lot of things.” Owen says the most important thing to his dad is seeing the kids be successful “in anything we do, on and off the ranch.” 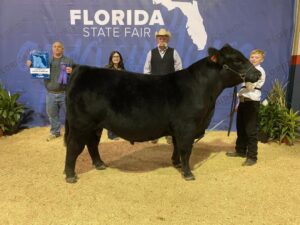 Chloe wants everyone to know her Dad’s favorite cow is actually a “daddy bull” because they make babies. She believes her dad’s behavior in the cow pens could use improvement. Chloe is quite the swimmer and never leaves home without her swimming mask. 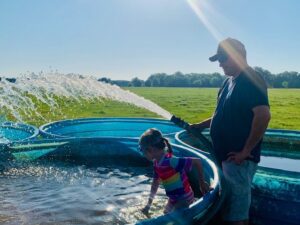 Claire says her dad’s favorite cow is the “dairy cow” because “it’s a fun word to say.” Claire says she is not allowed to ride her horse by herself or use a hot shot, but she loves her dad. 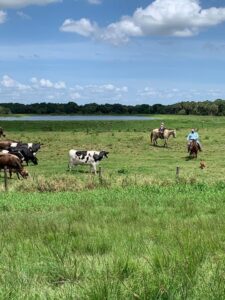 Aubrey says her dad’s favorite breed of cattle are Brahmans “because they make the best Mama cows.” She believes the most important thing to her dad is keeping his family safe. 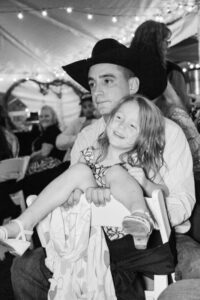 Ashlynn and her dad like to drive the tractor a lot, she says. She says her dad has a very pleasant nature while working in the cowpens. 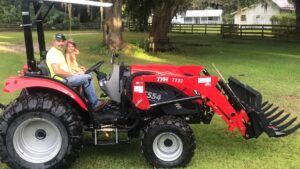