Technologies that Conserve Water, Monitor Weather, and Aid in the Fight against Citrus Greening

Technology that has been used to help humans defeat disease is now being used to cripple the Asian psyllid, which is the pest spreading the dreaded citrus greening disease. In the greenhouse, Dr. Nabil Killiny, an assistant professor of Entomology for the University of Florida (UF), has been able to silence genes that enable the psyllids to fly and eat, which causes them to die faster.[emember_protected custom_msg=”Click here and register now to read the rest of the article!”]
Using the same therapy that won the Nobel Prize in Physiology or Medicine in 2006, Dr. Killiny has found a way to debilitate and destroy the psyllid in a strictly controlled environment. He then viewed the insects with Computerized Tomography (CT) scans to verify the malformations. At present, he is working to develop a border plant that will protect commercial citrus, which has an annual economic impact of $9 billion in Florida.
Dr. Killiny’s research involves making molecular modifications to a plant that would attract the psyllids (thus drawing them away from citrus groves, especially if these plants could border the farms), and silence the pests’ genes upon feeding on the plant. In his controlled experiments, the pests experience genetic malformations that either cripple them or decrease their ability to fly or feed on other trees. Hence, in theory it would decrease the number of sprays needed to protect the citrus groves— and over time— decrease the population of the psyllids and the associated spread of citrus greening disease. “I can’t say when it’s going to be available,” Dr. Killiny points out, but he hopes to have a suitable plant in a year.
“Right now it’s working great . . . in the lab,” says Dr. Killiny, who works at the Citrus Research and Education Center (CREC) in Lake Alfred. “However in the field, the control is very difficult.” Another part of the study involves making sure that this plant would not harm any bugs or species that are helpful to Florida groves, such as honeybees. “We really need to see if this technology can face all these challenges and work,” he adds. 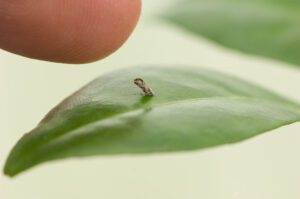 Tiny to the naked eye, the adult Asian citrus psyllid is no bigger than a common gnat and feeds with the posterior of its body raised. Photo by R. Anson Eaglin, APHIS