Experts are expecting a smaller Florida citrus crop next season— despite a uniform bloom. “Without a [citrus] greening solution, we’re going to see continued reduction in the crop,” says Les Dunson, president of Winter Haven’s Dunson Harvesting. As a small relief to growers and groves, he adds, “The trees look better. The rain has been a great help.”

Greening, also known as Huanglongbing (HLB), was discovered in South Florida in 2005. The disease disfigures fruit, causes premature drop, and kills the trees. “It’s a fight,” concedes Michael Sparks, executive vice president/chief executive officer of the Lakeland-based Florida Citrus Mutual, the state’s largest citrus grower organization. “We’re really at the crossroads.” The high cost of production is pressuring small-to-medium growers at the break-even, or below break-even point, he observes.

Florida’s citrus industry has a $9 billion impact annually on the state’s economy.

Others expect the crop to be smaller. Dr. Elizabeth Steger, president and owner of Kissimmee’s Citrus Consulting International, which forecasts orange crops for private corporations, estimates the orange crop at 89 million boxes. “We have over 1,100 trees as samples coming from different counties in the state. One important reason for a lower crop is the number of fruit per tree, which is significantly less than last year,” she says. “We also use last year’s drop rate because the infection of greening is still very heavy.” Her estimate range for the coming season is between 86 and 99 million boxes. “We look at the various scenarios and select one estimate that is usually at the middle range, or below the middle range like this year,” she elaborates.

Her long-term projection for the industry is positive, however. “I have been in this industry for a long time and— even though the industry is going through a very difficult time— it will survive and come through stronger,” Dr. Steger predicts.

Sparks also remains optimistic about the future and cites positive developments like research dollars available from the federal government and greater participation in organized sprays against the Asian psyllid that spreads the disease. Increasing densities up to 200 or 300 trees per acre will help growers reach the break-even point faster. “That’s what it’s going to take to rebuild,” he asserts.

Dunson is anticipating a round orange crop of around 95 million boxes, with another 15 million boxes for grapefruit and another three million for specialty fruit. “The drop rate is going have a big impact on the final crop,” adds Dunson, who says the fruit looks slightly smaller than last year.

Clint Updike, owner and operator of Alturas-based Updike Citrus, estimates the orange crop will yield 94 million boxes, after the drop. He’s pleased with the crop’s uniformity. “A bouquet bloom— that’s what we had this year. We haven’t had one of those in several years,” he recalls. When there’s a bouquet bloom, blossoms at the end of the limb look like a bouquet of flowers. Before greening, a bouquet bloom was more common, occurring every three or four years.

Last year’s citrus crop was down 21 percent, with values declining 19 percent, according to preliminary figures in the U.S. Department of Agriculture’s 2013-14 Citrus Summary report issued September 18. The state produced 124 million boxes, down from 156.2 million boxes the prior year. Oranges were down 22 percent.

The USDA’s annual Commercial Citrus Inventory Preliminary Report shows state citrus acreage declined two percent, to 515,147, from the prior year. But new plantings climbed above 10,000 acres, resulting in a one percent drop for trees.

Polk County remains the leader in Florida citrus acreage, with 81,810 acres and nearly 10 million trees, up from nearly 9.88 million trees in 2011, the data shows. Eighty-eight percent of Polk’s citrus crop is round oranges. 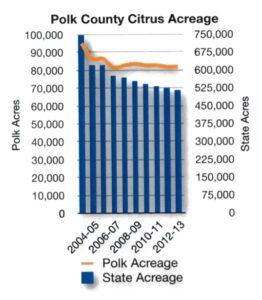 Citrus acres in Polk declined 14 percent in the last decade, compared to 31 percent statewide, shows a Polk County Citrus Production report by Chris Oswalt, a University of Florida/Institute of Food and Agricultural Sciences (UF/IFAS) citrus extension agent for Polk and Hillsborough counties. The report is based on USDA/National Agricultural Statistics Service-Florida Agricultural Statistics Service data. “Less acreage with more trees is the trend,” Oswalt says. “In mature groves, on wide spacing, growers many times will remove one tree and replace it with two . . . In newly developed groves, most growers are going to higher density.”

Among those who planted denser is Larry Black, general manager of Fort Meade’s Peace River Packing Company, who is Florida Citrus Mutual’s president. “I’m very encouraged. We’re going to pick our first crop off of our oldest high density blocks this year,” says Black, adding Peace River Packing is anticipating a three-and-a-half percent increase above last year. “So far, they’ve exceeded my expectations.” Black projects100 million boxes of round oranges statewide. “I see the grove condition is so much better than we’ve had in the last two years,” he says.

Victor Story, Jr., president of Lake Wales-based Story Companies, is hoping for 96 million or more boxes of round oranges this year. “The look of the tree, on groves that are being cared for, is better than this time last year,” Story reports. “We’ve had a lot of rain, which we didn’t have last year— and which we didn’t have the year before.”

Fruit size is “slightly bigger,” Story says, with more uniform bloom. “We’re all holding our breaths waiting to see if we get the same kind of drop after we get that dry period [October through first part of November],” says Story, who has five decades of experience in citrus. Story believes the crop is a bit more mature than last year’s, which may mean an earlier harvest.

Meanwhile, there is help through Florida’s Natural Growers, a Lake Wales-based cooperative with nearly 1,000 growers and about 60,000 acres. Dave Crumbly, the co-op’s vice president of agricultural services, says Florida’s Natural is offering $10 per tree to replant. The program is open to growers through 14 co-op membership organizations; if they are not already a member, they can join. Recipients make a 10-year agreement to provide fruit for Florida’s Natural, starting the fourth year. “At the end of the commitment, the grower owes nothing for the tree,” Crumbly states.

The goal is to plant one million trees. Applications are being accepted through October 31; approvals will be announced in November. “The good thing for the growers is: If they lose the tree, then there’s no repayment due,” Crumbly continues. “There’s really no risk to the growers as long as they deliver [fruit] throughout the period.”

Growers who submitted applications by September 30 to USDA’s Citrus Tree Assistance program may receive 50- to 65-percent of the cost. For more information about the USDA’s program, scan the QR code here with your smartphone or tablet, or visit the news section at www.flcitrusmutual.com.

Round Orange Crop Predictions for the 2014-15 Season